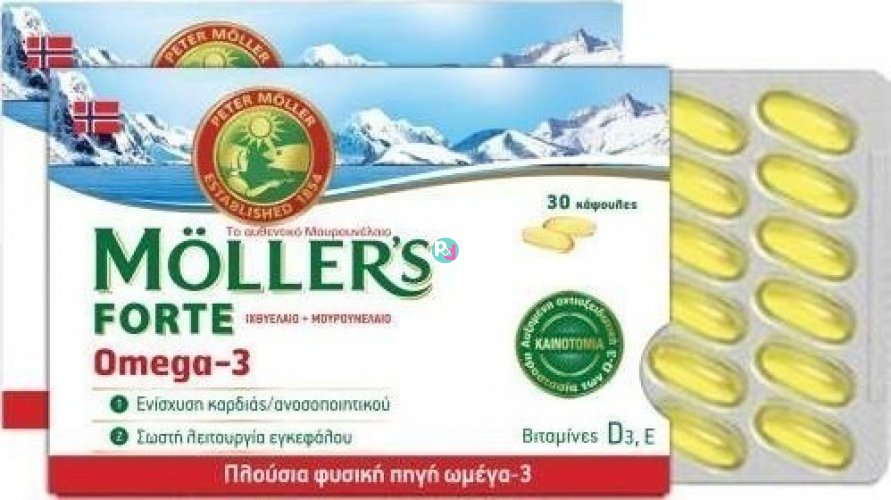 Soft omega-3 fatty acids capsules from a mixture of high quality feta-butter and fish oil in a 1: 3 ratio. Ideal solution for those who want to boost their immune and nervous system, heart, brain functions, etc.

In recent years innumerable studies have shown ω-3 fatty acids as a very important nutritional factor for our health. At the same time, the cod liver oil, previously known for its vitamins A and D, has emerged as an astonishing natural overflow since it became known

that it was also a very rich source of omega-3 fatty acids.

In Norway, the honeysuckle and fish oil hometown, but also in many other countries, especially those in the far north, Möller's dominates absolutely as the recognized high quality producer of cod liver oil, fish oil and omega-3 fatty acids.

With standards of purity (the absence of heavy metals and other toxic substances) and antioxidant protection for its products far more stringent than those of Norway and the European Union, and with raw materials of unsurpassed quality, Möller's offers the consumer for 160 years products that have " the health of millions of children and adults all over the world.

Apollonian Nutrition, with specialization and passion for quality, introduces these excellent products to the Greek market directly from the producer's house, avoiding the processing and / or strain that so often suffer from similar products by surrogate resellers.

What are the benefits of cod liver oil?
Möller's mutton oil is a refined oil of fresh louse of lobster or other Gadidae fish such as cod and cod. It is rich in ω-3 fatty acids and vitamin D, and contains both vitamin A and vitamin E (as an antioxidant). So the benefits to the body are multiple:

Ω-3 fatty acids (DHA and EPA)
DHA and EPA are found in cod liver oil and fish oils and are the most important fatty acids in the omega-3 family. They are structural components of human cells and important elements for the proper functioning of the brain, eyes and heart. They help in the prevention and reduction of joint diseases and rheumatoid arthritis, rickets and osteoporosis, cardiovascular diseases

Some studies indicate that omega-3 fatty acids can reduce the symptoms of attention deficit in children and improve their cognitive abilities. There are also indications that they protect against Alzheimer's and the progressive memory loss due to age. A Harvard study showed that

and the third in phospholipid form. In the market are widely circulated and synthetic omega-3,

due to their low cost. These are in the form of ethyl ester. Omega-3 from Möller's

are derived from cod liver oil or fish oil fish (never from aquaculture) and are,

of course, naturally ω-3 in the form of triglycerides.

Vitamin D
The most important role of vitamin D is the regulation of calcium and phosphorus absorption for bone building. Lack of it slows the growth of the human skeleton and "softens" the bones causing rickets. Recent research has shown that it also plays an important role in good brain function in middle-aged and elderly people. Studies also support its involvement in immune function. Other roles attributed to it are associated with its protective role against multiple sclerosis, heart disease and the risk of developing symptoms of influenza.

An important vitamin for cell division, skeletal growth and maturation, smooth functioning of the immune system, eye health and night vision, as well as organogenesis of embryos.